“We live in beautiful cages built by us to give the illusion of freedom, which we enter willingly” - Richard Price 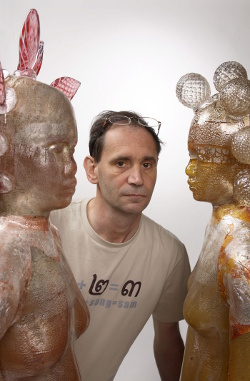 This quote perfectly encapsulates the philosophy embodied by Richard Price and, by extension, his art. As a British-born expatriate who divides his time between living and working in Amsterdam and Thailand, he is in a prime position to discern the characteristics of this illusion of freedom and subsequently represent it in his work. By its very definition, art is the conscious use of skill and imagination to interpret forms observed in nature. Thus, Richard utilises this connection between art as interpretation and life as an illusion to produce works which resonate with people on a basic, primal level.

Born in 1960 in Hampshire, England, Richard benefited from the high degree of freedom awarded to him by his parents throughout his childhood. His fascination with glass as an art form began at the age of 18 when he inadvertently discovered a glass furnace at his local art school. After graduating with a Bachelor’s degree in Art & Design in 1982, Richard excercised his freedom again by promptly moving to Amsterdam in order to study at the prestigious Gerrit Rietveld Academy. Under the guidance of tutors Richard Meitner and Mieke Groot, he was able to explore the multitude of possibilities offered by glass as an expressive medium.

Richard spent the next ten years working for a veritable who’s who of master glassblowers in both Italy and France, relishing the opportunity to learn from the highest authorities in the field and hone his own flourishing techniques until he became a master craftsman in the techniques of casting (pâte de verre) and blowing. To this day, his customers and co-workers benefit from the dedication Richard put in during his formative years.

Since 1990, Richard has travelled extensively around Thailand and has subsequently fallen in love with its people, culture and customs. His veneration for the country is so great that he now spends at least three months of the year there, embracing it as his spiritual home. Thailand also allows him to regularly ‘step out of his cage’; the environment is so far removed from Amsterdam city life, even the most routine of tasks offer a challenge. In being driven towards self reliance, the individual breaks free from the comfortable malaise of daily existence.

Inspiration for Richard’s art can be traced to the natural vitality observed in animals and humans. Much of his work is therefore dominated by motifs such as fish, horses and birds, as well as babies and children. His art is often adorned with extravagant, colourful ornamentation, indicative of the elaborate headdresses and other such clothing prevalent in Thai culture. His Buddhist tendencies also find subtle inroads into his creative visions. Richard’s firm belief in the “illusion of freedom” is such that his figures, seemingly imbued with life, are often enclosed by glass bars. They are both unable to escape and unwilling to. These are feelings we regularly experience in our own lives. People are content to live a life of beautiful delusion, constructing a reality which is easy to deal with. The ‘cage’ is an unconscious invention of society; we do not acknowledge it, yet we would feel threatened without it. I believe that Richard Price’s art speaks to us all.